I just watched Awake: The Life of Yogananda. It was an excellent documentary about the life of Paramhansa Yogananda, the Indian yogi guru who is credited with introducing meditation and Kriya yoga to western society. The man’s gaze was thought to bring about the transformation of self-realization and spiritual growth. His mystical qualities have contributed to his standing as one of the preeminent spiritual teachers of our time.

In the early 1900’s his own guru, Swami Sri Yukteswar, bade him to follow his intuitive visions and come to America. He said the West was high in material attainments, but lacking in any spiritual understanding. He believed it was God’s will that Yogananda should come to the U.S. to play a role in teaching this country the value of balancing the material with an inner, spiritual understanding of life.

In my own Vipassana meditation group we’ve been discussing our propensity for material and psychological attachments. Our tendency to identify with our beliefs, our thoughts, our emotions, our material objects, has left us on so many levels filled with anxiety and sadness when we come to understand that we have little control over such things on a foundational level. When we become incredibly happy we wonder how long it will last, a metaphorical game of “king of the mountain”, waiting for that lesser emotion to yank it off the top to stand in its place. When we feel anxious we solidify it in our body by telling ourselves, “I am an anxious person,” reinforcing the anxiety. And when we look in the mirror and see our physical beauty fading, we feel our very identity slipping between our fingers like a waft of maddeningly ungraspable smoke.

Yogananda taught us that heaven was inside of us. God was inside of us; no need for grasping externally. Spiritual growth meant recognizing our own inner divinity. He taught us that delusion was believing our happiness comes from material things, or things external to us. We can see evidence of this when we study the socioeconomic patterns of emotional states. The truth is, as a person’s wealth increases, so too does their unhappiness in many cases. A new study by the Gates Foundation portrays the ultrarich as “lost souls burdened by the fears, worries and family distortions of too much money.” And no matter how much money they had (all respondents had a net worth of $25 million or more) they generally reported that they would truly feel financially secure if they had twenty five percent more than they did.

In Awake, a Texas oil tycoon billionaire became a follower of Yogananda when he finally realized that as he amassed more and more wealth, he became more and more despairing. He left the oil industry and walked away from his wealth when he came to the conclusion that love was the only thing in his life that was real.

We chase ghosts in our society when we tell ourselves that right around the corner is that one object of desire, that one special something that is sure to make us happy, and it becomes oh so despairing when over and over again we learn that that’s not the case.

And all along, the freedom lies within us.

So when do we learn to stop all that chasing?

If we could only let go of this habit of attachment; this tendency to identify with impermanent emotional states, empty materialism and the bad advice of an imbalanced ego.

About five years ago I faced down one of the biggest, scariest monsters that lived beneath my bed. Since a small child I have been deathly afraid of fire. I remember putting myself through practice drills when I was tiny, frantically scampering around my room and deciding what I would take if our house caught on fire, if I only had five or ten minutes to “rescue” my belongings. What would I choose? God. How could I choose? This stuffed animal or that one? Pure anguish.

Decades later, I finally found myself in the “this is not a drill” category when my house was actually threatened by a forest fire. One hundred thousand acres burned and my house was on the perimeter. We knew it was encroaching, so we had taken some preliminary precautions and removed a few precious things like old family photo albums, my mother’s oil paintings, all of our digital photo files and all of the computer electronics. We went to bed that night under an oppressive blanket of smoke smell, but somehow never expected that we’d actually have to evacuate.

At 2 a.m. we awoke to heavy pounding on the door and opened it to total chaos. A firefighter was on our porch telling us to leave immediately, the wind shifted and we had very little time. I will always remember that scene, neighbors bawling their eyes out as they jumped into their cars, trucks speeding down the narrow lane, people screaming, emergency lights flashing, men behind loud-speakers shouting orders for mandatory evacuation, people scattering in every direction…like the little terrified ants that we were. And then I gazed up at this alpha predator, this giant wall of fire creeping down the mountain face directly over our heads. Like lava, moving thick and slow, unrelenting. It was the closest I’ve ever come to staring directly into the face of God, the full power of Mother Nature pounding on humankind’s door, fully illuminating the dead of night. We had no response to this. We had no chance against it. The fire had no emotion, no apologies, no second thoughts.

It was indescribably horrible and beautiful all at once.

I couldn’t move. I couldn’t take my eyes off that wall of fire. If it had been a J.J.Abrams movie, they would have given it some animal-like sound to fully drive home its monstrosity. As it was, up close and personal, it had only the sounds of human screams punctuated with the occasional explosion, like bombs detonating, when a two-hundred-foot Ponderosa Pine would succumb to the flames; They never went quietly.

My husband Aaron held my shoulders to get my attention. “Grab what you can! We have no time!” He scurried around plucking art off the walls and a few this-and-thats, even though he was in a bit of a daze himself and not thinking clearly. That’s when it suddenly hit me so hard, with such a deep realization…

I didn’t care about any of it. Let the fire take it.

All I cared about was that which had a heartbeat. My three cats were already safely tucked inside their little travel carriers in the car. My three dogs were in the SUV. But as I stood on the porch, I saw the terrified little faces of the feral cats in the neighborhood. We fed and cared for them as best we could, we built them little shelter homes, but they couldn’t be touched. They were wild animals. I didn’t care. I grabbed one and tossed him into a big dog kennel. He let me. I grabbed another one. Tossed him in second, too stunned to protest. I went for a third and she bit me clean through my thumbnail. I wanted to keep a hold of her because I didn’t want her to die, but she just kept biting and my own survival instinct proved stronger. I had to let her go. My hand was shredded.

We drove away through a wall of my own tears.

Although no human intervention could have stopped the descent of that fire down that mountain wall, in the end Mother Nature changed her mind. Just as quickly as the wind had shifted to send the flames right to us, the wind shifted again and sent them back up the mountain away from the town. Because of the unstable nature of the burning fire and the heavy smoke, we weren’t able to return to our home for another week, but every day I crossed the barrier and went to my yard to put out fresh food and water for all the feral kitties that stayed behind. I walked around, speaking in a soothing voice, letting them know all would be okay.

It was then that I realized my fears of losing all of my belongings, of having to choose what books, what jewelry, what pottery to evacuate in the case of a fire was pure delusion. I didn’t care. I cared more for a feral cat who bit me repeatedly than I did my precious furniture or my mom’s antique china.

The realization of that, the freedom that came with it…was nothing short of heaven, and yes it was right inside of me. I felt a complete release, the walls around my heart instantaneously disintegrated and love poured out. It’s not quite as easy to envision this freedom from abstract concepts such as thoughts and emotion, but I believe over-identifying with these things can be just as delusional as our material addictions. If we can learn to observe our emotions, witness them non-judgmentally, rather than being detonated by them like flora in a wildfire, we can find that level of inner freedom.

Oh, and the kitty that made mincemeat out of my hand, with her teeth? Her name’s Bibi and she is now taking a nap on my bed. The fire experience changed her. She realized she wanted to love more and bite less. Even kitties have their own version of spiritual growth. 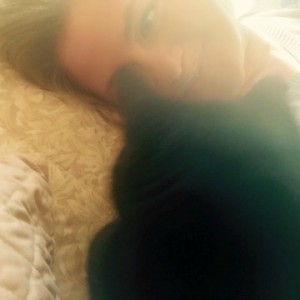 I had a remarkably stressful, yet pretty miraculous month of May. It would seem that I slayed a mythological dragon, and befriended a real END_OF_DOCUMENT_TOKEN_TO_BE_REPLACED

Nobody perfects the art of emotional numbing like the Highly Sensitive Person without a resilience strategy. The reason of course is that END_OF_DOCUMENT_TOKEN_TO_BE_REPLACED

I recently read a book by @drsuzannesimard called

Ghosti, Director of Feline Resources is holding of

The Gulf of Mexico sends the cavalry. The monsoons

To the Pecos Wilderness currently burning (350,000