Sometimes the smartest strategy is to just stop running.

When this spring arrived, after the longest, snowiest winter I’ve experienced in New Mexico, I set a very specific goal to get my blood pumping again as I awoke from a deep hibernation. There’s a trail very close to my house that I find super difficult. The Blue Dot Trail starts at the top of the Rio Grande Canyon and switchbacks down nearly 1000 feet in less than a mile, where the glorious Rio Grande river snakes across the landscape. It’s a grueling hike for me. Going down is a relative piece of cake, but at that steep grade even that transforms my quads into shaky half-functional constant complainers, and then when it’s time to go back up my whole being rebels to the point of actually contemplating asking a helicopter pilot to come rescue me, or possibly just spending the rest of my life there at the bottom of the canyon. It’s a magical place at the bottom, with bright orange and turquoise dragonflies the size of my hand, conversational croaking bullfrogs, and tiny pools of the clearest, most healing waters you’ve ever seen. No question, it’s my definition of paradise. But I’m not sure where I’d plug my phone in, and I imagine the winters get terribly cold down there. So, yes, I do have to eventually make the dreaded ascent.

Feeling like I can’t do something with physical ease, especially when it’s keeping me from spending as much time as possible in a place of magical wonders, is not something I’m willing to accept.

So I decided to start training myself. My goal was ten minutes down the trail, then sprint straight back up. Do this until I no longer lose my breathe, then increase to fifteen minutes, etc.

When I started, I was miserable. Ten minutes down and ten minutes back up is the equivalent of thirty flights of stairs. Couple that with pretty intense heat and high elevation, and it resulted in me having to stop, heaving, to catch my breathe and ease my screaming lungs, three or four times. Ten minutes down the trail morphed to thirty on the way back up.

After doing this a few times, my husband Aaron (a physical beast who seemingly has no limits) had a better idea.

He said, stop sprinting. Walk it slowly. He told me my goal should be to walk at a pace that allows me to just keep a steady pace without stopping. Who cares about speed.

I tried it. I walked at a cartoonish crawl. But I never stopped once, and I didn’t even find it all that painful. No rest breaks. I was so proud of myself!

While slowly working my way up the cliff side, a memory flashed at me.

I was in third grade. At the end of the school year, in my tiny hometown of Limon, Colorado, we always had a little track meet for fun. There was no training involved, it was just kind of a bring-in-the-summer celebratory event. I was entered into the 400 meter race, and when the little start-gun popped, I took off like Secretariat. Full sprint, I left every other kid in my dust! For some reason I saw my mom, throwing her hands downward, over and over, as if to say, “Woah! Slow down!” She was laughing. There was no way I was slowing down when I was luxuriating in the rush of domination!

I blew through my entire gas tank of energy in about two minutes, and then watched helplessly as the air completely deflated from my lungs and every single kid behind me was now leaving me in their dust.

I came in last.

Dammit. The spirit of the Blue Dot Trail was using this as a teaching moment for me. I asked my own life, “I’m doing it again, right?” I shook my head at the obvious parallel.

“Look at you go!” My husband boomed behind me. “It’s no effort at all for you!”

Right now I need to slow the pace, on and off this trail. Such an effective metaphor for me, this trail. I need to pay attention to what my spirit is asking for right now. Slow. It. Down. Life will not pass me by. In fact, growth and progress require periods of inaction, hibernation, unplugging, and decompressing, in order to think, feel, and create from a fresher, rejuvenated perspective.

I find so many people like me who, if they aren’t careful, have a tendency to run through the full capacity of their energy and then wonder what’s wrong with them that they can’t keep running without feeling breathless?

Nothingness is just something nature calls for occasionally. Sometimes it’s all about developing a relationship with inaction, in order to maintain our long-game stamina. It’s not up to us to argue with our energetic requirements. It’s just up to us to honor them, to recognize our own innate wisdom.

Respectfully, unapologetically, slow down where you can, if that’s what you’re feeling you need. Your life will thank you, your nervous system will love you, and your progress will ultimately supercharge if you learn how to respect your creative rhythms without self-abuse or extraneous drama.

The sprint will return. But if you’re feeling that a slow amble is your pace right now, I’m right there beside you. We’ll sprint once again when we feel good and ready. 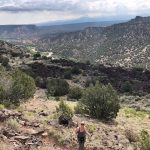 “I circle around god, the primordial tower, and I circle ten thousand years long; and I still don’t know if I’m a falcon, a storm, or an unfinished song.” ~ Rainer Maria Rilke

The doorway to instinct and intuition enters through one channel--our body's signal for Yes and No, often described as our Gut Feelings. END_OF_DOCUMENT_TOKEN_TO_BE_REPLACED

It's true, my friend. Small talk can feel painful to an HSP. One thing every Highly Sensitive Person has in common is that across the END_OF_DOCUMENT_TOKEN_TO_BE_REPLACED

I'm not sure how it's feeling where you are right now, but New Mexico is pretty darn hot. Since we live at over 6,000 feet elevation, and END_OF_DOCUMENT_TOKEN_TO_BE_REPLACED