I don’t know why things happen as they do. None of us on this earth plane have been gifted with that sight. All we can do is make our best sense of events, moment by moment. We filter our understanding using the lenses through which we choose to translate life.

I had a hell of an August.

It was nerve-wracking from the beginning. I was scheduled for a total abdominal hysterectomy after palpating a very large mass in my right side, which turned out to be a tumor in my uterus. I was told ten years ago I needed it, but declined, thinking it was a surgery performed far too regularly, a surgery of convenience when doctors didn’t want to deal with the everyday bothers of the lady parts anymore. But it proved to be a problem that wasn’t going away. The longer I ignored it the more angry it became, apparently feeding off my denial and complacency. Fast forward a decade and the tumor, a benign but rapidly growing adenomyoma (not a fibroid), had grown so large I now perpetually looked six months pregnant. But more importantly, I could no longer digest food or urinate normally due to this thing stomping on everything it came in contact with.

From the beginning it felt disturbing. My surgeon was honest with me. The tumor had some properties of a malignant cancer for which there is no successful treatment. She assured me there was nothing to worry about, but wanted to be thorough. So, in July I had a ton of diagnostics done– cytology, an ultrasound, an MRI, and a biopsy– which came back benign. I was so relieved, having spent a couple of weeks trying hard, and mostly succeeding, in remaining ultimately positive, while having rogue thoughts contemplating the possibility of hosting an incurable, terminal disease. Not wanting to give in to those thoughts, I didn’t want to be in denial either. If that is what was happening, I thought, I would navigate it with as much grace and dignity as I could. But it was all okay now.

No need for fear.

So, with the worry behind me, all I had to do was visualize sailing through the surgery with zero complications and a rapid recovery, which I practiced earnestly. Free of reservations, I thought I was ready. By now my bladder was becoming nearly obstructed by this heavy, dense tumor I’d been struggling with for over a decade. It made me tired, constantly anemic, bloaty, I had to pee a hundred times a day, and it gave me severe back aches.

The thing started to feel Shamanic, energetic, like carbon in my system I couldn’t transform. I recently finished writing an explosive, hardcore revealing memoir, a catharsis of magnificent proportions involving the unwrapping of deeply hidden family traumas. Its writing was so therapeutic, as was the sharing of it (a few people have pre-read it prior to publication) once I finished.

It felt like a birth of sorts. I said that to many of my friends, out loud.

A birth… And then all of this stuff with my uterus growing like a pregnancy came to a head? How could it not be related, I marveled! It felt like I had transformed an inconceivable amount of my own hurt over the past ten years, made an offering of blood, soul and psyche to the spirit of my entire history– patriarchal and matriarchal– and this wrecking ball in my uterus was the useless byproduct of all of that. It was the carbon in my system, the residue my psyche could not digest…because it wasn’t mine. It was the pain I carried for my mother, my grandmother, my sisters, brothers, and entire lineage seven generations back and seven generations forward.

If I wasn’t able to transform it any further, I was ready to have it removed. I did ceremony around it. I transferred the spirit of my uterus into some carefully chosen crystals and placed them in a sacred medicine bag. I’ll be buried with this some day, far from now, my body complete.

Through all of this I was in good spirits, feeling strong, feeling like I was stepping into some enormous transformation, the doorway unlocked by my own courage and readiness. That’s what I told myself…when the truth was…

I had no idea what I was stepping into.

I guess that’s the magic of transformation. If it was predictable, it wouldn’t be the catalyst for deep change. If we knew what was coming, we could prepare for it. We could tell ourselves well-constructed stories about it, as I had already done. We could let our mind make up the meaning, rather than our soul. We could think our way through it, rather than feel our way.

The short story is, the surgery happened. 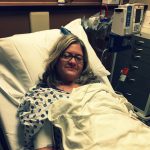 Peacefully awaiting my surgery, ready for the O.R.

And then everything colossally unraveled.

Within four days of being home after the initial surgery, all the while suffering through indescribable misery (weakness, swelling and nausea the likes of which I hope I never experience again) and excruciating pain (which I interpreted as being normal post-op recovery), I completely crashed.

I woke up on Day Four post-surgery and declared to Aaron, “I’m dying.” And felt 100% certain of that declaration.

He rushed me to the E.R. where they diagnosed me with Stage 3 Acute Renal (Kidney) Failure. I was life-threateningly anemic and dehydrated. A C.T. scan revealed why. I had been internally bleeding probably from day one, which had now turned into an enormous abscess in my pelvic cavity. My body was septic and my kidneys failed because they just couldn’t cope with all of this chaos and mess.

With three kinds of intravenous antibiotics, blood transfusions, another minor surgery to place a drain tube to clean out the infection, i.v. fluids, pain meds, anti-emetics, too many blood draws to count, more C.T. scans and ultrasounds, and a kidney specialist now on my case… I could feel my loose threads slowly starting to weave back together, creating something coherent.

But that first night back in the hospital, as I rested in the dark emergency room, I felt I had a choice.

I’ve had this choice once before in my life, and I made the same decision. I’m not finished here yet. I have some work to do. Had I truly wanted to go, I believe I could have made that choice too. I could have simply chosen the “out” door, with no spiritual repercussion. With my decision the Angel of Death bowed, respectfully receded, stepping back to make room for the Archangels. No resentment, nothing personal, it just wasn’t my time.

Within Five days my kidneys whirred back to life and I was discharged. I still had several weeks of pretty significant challenges– continued nausea, fluid in my lungs, pain, a horrible drain tube in my side, torturous night sweats, lots of recheck doctor appointments– but every day was better than the last.

The day before my surgery I had a dream.

In it, my adult self held myself as a tiny baby. I loved her so much, rocking her in my arms. I told her, “Baby, there is nothing I won’t get you through. No matter what you’ve already been through, no matter what you have yet to go through, please know that I will utilize every resource to bring you through it. You will be healed.”

It was such a magical dream, I woke up with tears streaming down my cheeks. As I remember the Hell of August, I recall that dream, smiling at the revelation that before any of it happened, my spirit seemed to have it covered. I was my own angel.

How can I feel anything but gratitude at that?

I still feel I had to have that wrecking ball removed, and I have zero regrets. Nor do I place any blame on my doctors. As it turns out, I tell myself I had to transmute the poison of the past too. My kidneys became tired…they needed resolution. They needed to be free from the lifetime of resentment and fear and pain and rage that I inherited from my mother and my father, and their mothers and fathers…on an on until my body’s filter said, “Enough!”

I needed to liberate myself.

I had to walk to the precipice and say a firm, “No,” to the Angel of Death.

I had to want to be here, despite my history.

And never has a choice been more invigorating.

I wanted to close with an enormous thank you to literally hundreds of people whose love carried me through this. You all know who you are and I’ll never forget how your energy buoyed me when I was too weak to lift myself. Also, I wanted to announce that I am now 100% back in full force, working full time, with so much love in my heart for my clients and everyone in my soul tribe, be our connection in person, through social media, or simply in the ether. Please contact me if you need anything in service to your own soul, mind, or psyche.

LOVE YOU ALL SO MUCH. 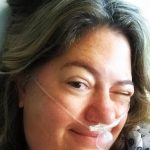 In the hospital, trying to maintain some levity while my husband vexes me with the camera.

The doorway to instinct and intuition enters through one channel--our body's signal for Yes and No, often described as our Gut Feelings. END_OF_DOCUMENT_TOKEN_TO_BE_REPLACED

It's true, my friend. Small talk can feel painful to an HSP. One thing every Highly Sensitive Person has in common is that across the END_OF_DOCUMENT_TOKEN_TO_BE_REPLACED

I'm not sure how it's feeling where you are right now, but New Mexico is pretty darn hot. Since we live at over 6,000 feet elevation, and END_OF_DOCUMENT_TOKEN_TO_BE_REPLACED

Empaths, HSP’s, your energy is your gold. Guar

This is you telling your brain what *not* to focus